Leaf biochemical composition corresponds to traits related to the plant state and its functioning. This study puts the emphasis on the main leaf absorbers: chlorophyll a and b (C-ab), carotenoids (C-c), water (C-w) and dry mater (C-m) contents. Two main approaches were used to estimate [C-ab, C-c, C-w, C-m] in a non-destructive way using spectral measurements. The first one consists in building empirical relationships from experimental datasets using either the raw reflectances or their combination into vegetation indices (VI). The second one relies on the inversion of physically based models of leaf optical properties. Although the first approach is commonly used, the calibration of the empirical relationships is generally conducted over a limited dataset. Consequently, poor predictions may be observed when applying them on cases that are not represented in the training dataset, i.e. when dealing with different species, genotypes or under contrasted environmental conditions. The retrieval performances of the selected VIs were thus compared to the ones of four PROSPECT model versions based on reflectance data acquired at two phenological stages, over six wheat genotypes grown under three different nitrogen fertilizations and two sowing density modalities. Leaf reflectance was measured in the lab with a spectrophotometer equipped with an integrating sphere, the leaf being placed in front of a white Teflon background to increase the sensitivity to leaf biochemical composition. Destructive measurements of [Cab, C-c, C-w, C-m] were performed concurrently. Results: The destructive measurements demonstrated that the carotenoid, C-c, and chlorophyll, C-ab, contents were strongly correlated (r(2) = 0.91). The sum of C-ab and C-c, i.e. the total chlorophyllian pigment content, C-abc, was therefore used in this study. When inverting the PROSPECT model, accounting for the brown pigment content, C-bp, was necessary when leaves started to senesce. The values of C-abc and C-w were well estimated (r(2) = 0.81 and r(2) = 0.88 respectively) while the dry matter content, C-m, was poorly estimated (r(2) = 0.00). Retrieval of C-w from PROSPECT versions was only slightly biased, while substantial overestimation of C-abc was observed. The ranking between estimated values of C-abc and C-w from the several PROSPECT versions and that derived using the VIs were similar to the ranking observed over the destructively measured values of C-abc and C-w. Conclusions: PROSPECT model inversion and empirical VI approach provide similar retrieval performances and are useful methods to estimate leaf biochemical composition from spectral measurements. However, the PROSPECT model inversion gives potential access to additional traits on surface reflectivity and leaf internal structure. This study suggests that non-destructive estimation of leaf chlorophyll and water contents is a relevant method to provide leaf traits with relatively high throughput. 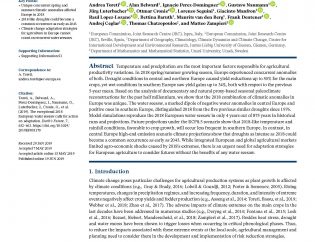 A 30+ Year AVHRR Land Surface Reflectance Climate Data Record and Its Application to Wheat Yield MonitoringModeling the spatial distribution of plants on the row for wheat crops: Consequences on the green fraction at the canopy level